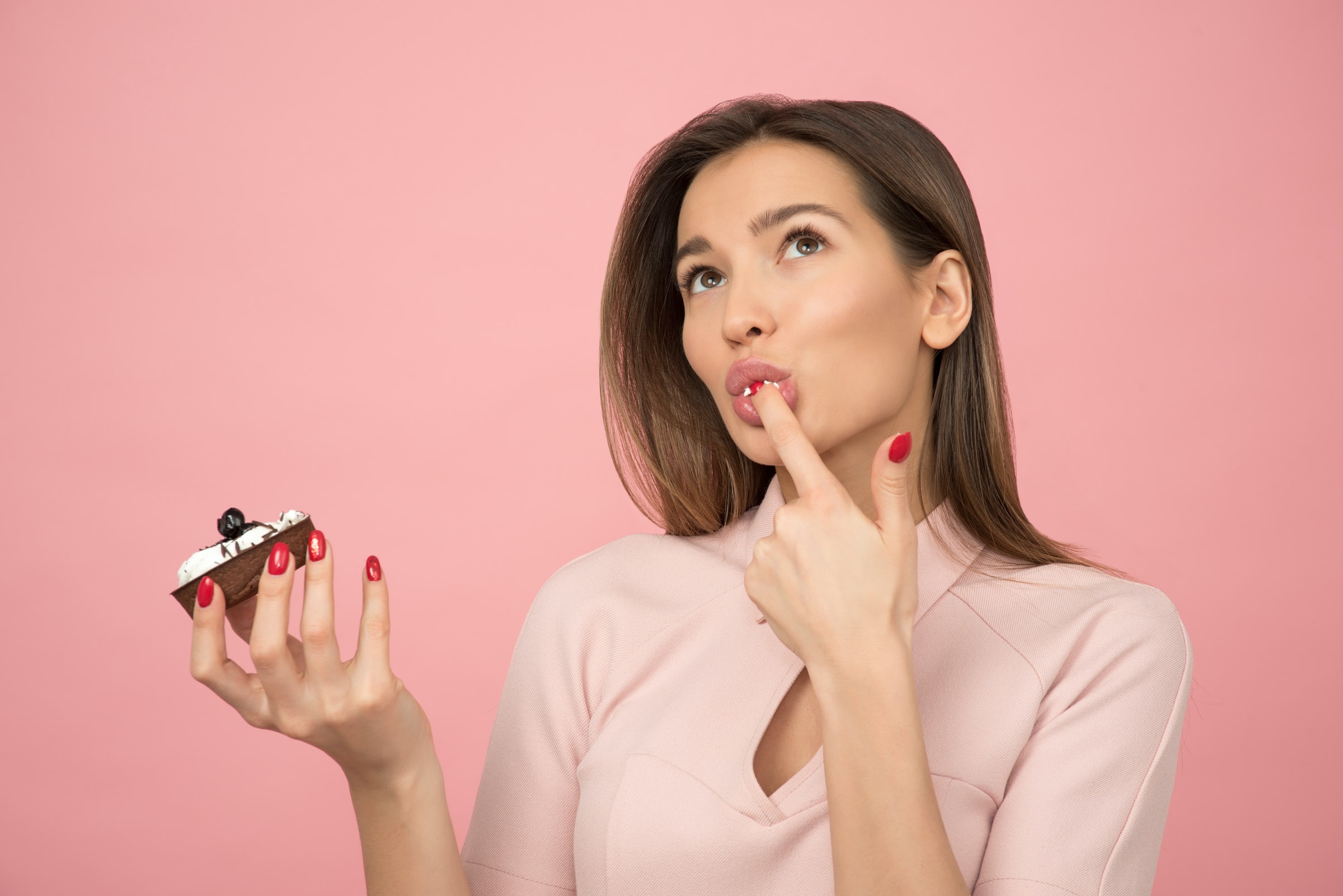 Eating will always be an emotive topic, but intermittent fasting (IF) seems to attract an inordinate level of criticism. There’s a lot of misinformation being tossed around out there, though. Being an “IFer” myself, I wanted to clear up some of the most common myths.

If you haven’t heard of intermittent fasting, it’s an eating regimen where you cycle between periods of eating and not eating, i.e., fasting. As Gin Stephens explains in her book Fast. Feast. Repeat., there are different ways to do it.

One of these is a time-restricted approach. So, for example, you may eat from 12-6 pm (your “eating window”) and your fasting period would be from 6-12 pm the next day. In IF lingo, this is known as 18:6. This can be shifted according to what works best for you. My fasts can range anywhere from 16:8 to 20:4 depending on what’s going on in my life.

Another way of doing IF is alternate-day-fasting, or what Gin calls the “up-and-down-day” approach. The popular 5:2 regimen would fall into this category. For two days of the week, you eat 500 or fewer calories, and for the other five days, you eat normally. Again, this can be shifted according to your goals and needs. Some people do 6:1 while others do 4:3, for instance. It’s important to note that a fasting day should always be followed by a “normal” eating day.

A well-known benefit of IF is something called autophagy, which is a cellular repair and renewal process that’s triggered by fasting.

I belong to a Facebook group called Delay, Don’t Deny (the title of Gin’s first book), which has over 300K members. Every day I read stories from people who say their health has improved significantly because of IF – whether they have diabetes, heart issues, an unhealthy relationship with food, a chronic skin issue, allergies, inflammation, hormonal problems – it’s amazing what’s happening for IFers. In the group, these are called “NSVs”, or non-scale victories.

I started IF about two-and-a-half years ago and my own NSVs include lower cholesterol, fewer hay fever symptoms and “appetite correction” (see below). As for my weight, I’ve reached and maintained my goal, while generally eating what I want. That’s no mean feat when you’re post-menopausal.

Just to clarify, that doesn’t mean that I sit around eating entire tubs of ice cream and pizza every day. At first, I did try cramming in way too much junk, but over time, my body began to regulate itself and I could no longer eat the same amount of food as before.

I started to naturally listen to my body and eat more intuitively. That not only goes for quantity, but also for quality. I just can’t eat the kind of crap that I used to love. 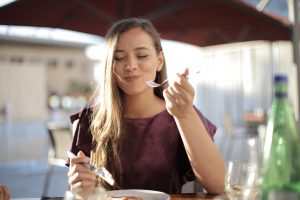 The stigma and the myths

Despite being thrilled with my IF lifestyle, I’ve kept it pretty quiet as I tend to avoid potentially confrontational conversations at all costs. It’s amazing how quick people are to criticise something that they’ve never tried, nor done any research on.

I want to make one thing clear: I’m not trying to preach IF or say that it’s right for everybody. It just annoys me when people (doctors included) dismiss it before doing their research.

That’s one of the reasons why I love Fast. Feast. Repeat. It’s packed with references to scientific studies that back up everything Gin says. (Dr. Jason Fung, a Canadian nephrologist, is another great IF resource.)

It’s also why I wanted to share and debunk some of the most common myths about IF, with the help of Gin’s book and the research she cites. So, without further ado, here we go.

Myth #1: IF puts your body in starvation mode, slowing down your metabolism.

Many people believe that you constantly need to be eating to keep your metabolism going strong. What they probably don’t know is that eating causes your blood glucose (sugar) to increase, in turn causing your body to release insulin, which is trying to keep your blood sugar levels balanced.

But if you’re eating all day long, the signals get confused and your body starts pumping out insulin even when it’s not needed. This leads to higher levels of insulin always swirling around in your body and that’s unhealthy.

Why? Because too much insulin in your body, or hyperinsulinemia, is linked to diseases including type 2 diabetes, metabolic syndrome, heart disease, some cancers and Alzheimer’s.

Research shows that fasting actually protects your metabolism because insulin levels decrease during the fast. Long story short, with decreased insulin levels we can access our fat stores and begin to break them down for fuel.

Because our bodies are receiving the (correct) message that we have plenty of stored fuel and we are not starving, our metabolism increases during fasting. Which brings us to…

Myth #2: IF is the same as a calorie-restricted diet.

Diets that require you to restrict your daily calorie intake do send your body into so-called starvation mode, because continued calorie restriction over time slows down your metabolism more and more – something called adaptive thermogenesis.

Therefore, you have to keep cutting your calories to maintain weight loss. When your metabolic rate slows, you use less energy, leaving you feeling lethargic. It’s a vicious cycle.

Also, with a traditional calorie-restricted diet, your hunger hormone (ghrelin) increases and your satiety hormone (leptin) decreases, according to one 2017 study. This can lead you to overeat because your body isn’t getting the message that it’s satisfied.

With IF on the other hand, ghrelin and leptin are correctly balanced and your body knows when it’s had enough food, so you’re not inclined to binge (see Myth #3).

Myth #3: IF forces your body to ignore hunger signals/you’ll feel hungry all the time.

On the contrary, IF helps you to reconnect with the hunger (and satiety) signals that are sent when your body releases certain hormones including ghrelin and leptin. Remember the appetite correction that I mentioned earlier? Here’s what Gin has to say:

“Sometimes, IFers think appetite correction only means that we get full quickly and find it easy to stop when satisfied. That’s part of it, but it’s not the end of the story! Some days, you’ll have an increased appetite. Listen to your body! Increased hunger on some days is also a feature of appetite correction.”

She stresses, however, that you shouldn’t ignore hunger that gets progressively worse. If you do feel like your hunger is increasing every day, then it’s time to tweak your IF protocol. IF isn’t about ignoring constant hunger. It’s about intuitively understanding when you’re truly hungry and when you’re truly full.

Being unable to respond to our hunger and satiety cues isn’t due to IF. Rather, it stems from factors like being taught to eat at certain times of the day whether we’re hungry or not, years of following restrictive diets and eating processed foods that mess with our hunger hormones, among other things.

If you’re on the correct IF protocol for your body, then your hunger/satiety hormones will be properly balanced, and you simply won’t be hungry all the time. When I was considering trying IF, I thought I’d never be able to fast without feeling like I was constantly starving. Anybody who knows me knows that I LOVE my food. So I was pleasantly surprised when that didn’t happen.

Myth #4: IF causes you to lose muscle mass.

Food is what fuels us. But when we’re not eating, our bodies have to find other sources of energy. This includes stored fat. Because insulin levels are low during fasting, we can easily access this stored fat, meaning muscle tissue is less likely to be targeted for fuel.

The result is that our muscle mass is preserved when fasting. In fact, research shows that IF not only protects your muscle; it helps your body to build muscle tissue because it causes human growth hormone levels to rise.

On a typical low-calorie diet where you may be eating less but more often, your body will turn to muscle tissue for fuel. This is because insulin levels are higher and it’s harder to access your stored fat for fuel.

Myth #5: IF is an eating disorder/causes disordered eating.

I’ve never had an eating disorder, but my relationship with food hasn’t always been healthy. There have been too many times when I’ve used language like “being good” (staying away from cake, cookies, crisps, etc.) and “being bad” (eating those things). Can you relate?

Since starting IF, that negative self-talk and those feelings of guilt when I’ve eaten a less-than-healthy treat have significantly (if not completely) diminished. Many people in the Facebook group who have struggled with disordered eating their whole lives also say that IF has been emotionally liberating.

There’s not much research about fasting and eating disorders, but one study of an alternate-day-fasting regimen found that participants binged less, and that there was no increase in disordered eating behaviour.

Nevertheless, if you have a diagnosed eating disorder, you should probably steer clear of IF because there’s potential for you to misuse IF in an unhealthy way. That doesn’t mean fasting is at the root of the problem, though. Gin gives a useful analogy:

In one of my health coaching Facebook groups, a member recently brought up the topic of IF. A flurry of comments followed. I was alarmed to see one which asserted that IF “wreaks havoc on women’s bodies if done long-term”. There was no further explanation; just the one sentence.

When I asked my fellow IFers in Gin’s Facebook group what myths had been thrown at them by critics, I was surprised to discover that many women had been warned off IF for this reason, too. Rumour has it that IF can cause women’s hormones to go haywire.

Is there any truth in this? Is IF safe for women or not? While IF isn’t recommended for women who are pregnant or breastfeeding, and nobody (regardless of gender) should over-stress their body with extreme diets/food restriction and over-exercising, one study showed that fasting doesn’t affect the menstrual cycle of normal cycling women.

In 2016, a comprehensive review of all existing animal and human studies addressing women’s health and disorders concluded:

“Fasting has shown to improve the reproductive and mental health. It also prevents as well as ameliorates cancers and musculoskeletal disorders which are common in middle-aged and elderly women…fasting can be prescribed as a safe medical intervention as well as a lifestyle regimen which can improve women’s health in many folds.”

When I asked people in my IF Facebook group about the myths that they’d come up against, the number of responses I received was astonishing. Therefore, this list is by no means complete, but hopefully, it’s a good starting point for a discussion on IF.

Was this post helpful? Would you like to read more about IF? I’d love to hear your thoughts in the comments below.